Stupid Remote is a web app that controls devices over HDMI CEC and infrared: turning tvs on and off, switching inputs adjusting volume. Customization requires editing simple HTML and JavaScript and uses cec-client and lircd for control. 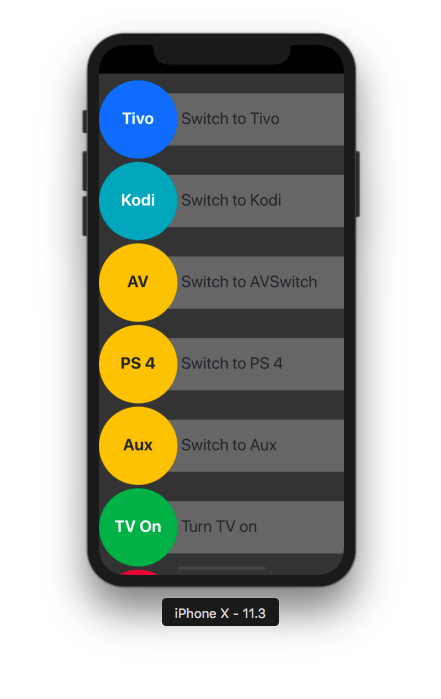 This project was written out of frustration fighting with ‘smart remotes’. Stupid Remote was created to use HDMI CEC and infrared remote control commands. It might not be simpler, but it is a better solution for me and it might for you.

The target platform is a Raspberry Pi running either Raspbian or OSMC (OSMC is a Raspbian based distribution that boots into Kodi.)

The How: HDMI CEC

Most modern HDMI connected devices support Consumer Electronics Control or CEC. It allows devices to send commands to each other, typically to get the TV to switch input and control volume. If you have ever turned on a game console and had your TV automatically change input to that device you have seen CEC in action.

HDMI CEC How to

Using cec-client on a Raspberry Pi

The default commands that Stupid Remote come with are the ones that work for me and my Samsung TV, the commands you will use will depend on your setup.

The important outcome of this section is to have cec-clent commands to run. For example: TV on, TV off and changing inputs.

If you are using CEC to send commands to OSMC/Kodi, they will not be available to Stupid Remote. This is a known issue and something I am looking at.

A side note, there is a USB CEC adapter made by Pulse Eight and it is possible to use this device with cec-client on a linux machine that is not a Raspberry Pi, see https://www.pulse-eight.com/.

The How: Infrared Remote Control

First the bad news. Infrared hardware is almost all DIY, there no commercial plug and play devices that are widely available.

Now the good news. The parts for the hardware are very cheap and reasonably simple to put together.

The general approach is to setup an infrared receiver and capture the button presses from your device’s remote control. The next step is to create a transmitter (also known as an IR blaster) to send the button presses to the device.

All of the details to setup the hardware and software are covered in a 4 part series here:

The important outcome of this section is to have irexec commands to run. For example changing to a non-HDMI input or navigating the TV menu.

The How: Stupid Remote

With cec-client and irexec commands ready, the hard work is done, all that remains is to setup Stupid Remote with the desired buttons and actions.

The following instructions will install Node on Raspbian or OSMC.

Update and install build-essential and xz-utils:

The next steps will download the latest version of Node for your model of Raspberry Pi.

Determine what model of Raspberry Pi cpu you have:

The results should be armv6l, armv7l or armv8l, this cpu model will be in the download package name found:

On the Raspberry Pi, download the appropriate package, install it and restart:

At this point it is assumed that cec-client and LIRC have been installed and there are working commands. If not please see:

Using cec-client on a Raspberry Pi

From the root of the project, update npm and start:

At the moment, customizing Stupid Remote requires you to edit HTML and JavaScript. It is not hard and there isn’t a lot of if it.

Start by editing the JavaScript, stupid-remote-X.X/routes/cec.js. Copy or edit the existing router.get() calls to match your cec-client command.

For example, the TV On routing handler looks like:

Next, edit the default html, stupid-remote-X.X/public/index.html.

For example, the TV On button and button bindings look like:

A note about the Swagger UI, you will have to update the url path at the top of the screen to match your hostname.

In retrospect, this project really is a result of my other work on cec-client, LIRC and Raspberry Pis. This is an on going project for me that I use daily so expect it to be maintained and periodically updated.

I am not stuck on Node, but it has the bindings for CEC and LIRC and will run even on the oldest Raspberry Pis, but I could see this re-implemented in Python.

Hope you found this interesting and maybe inspired to use that old Pi sitting in your desk drawer for something interesting.