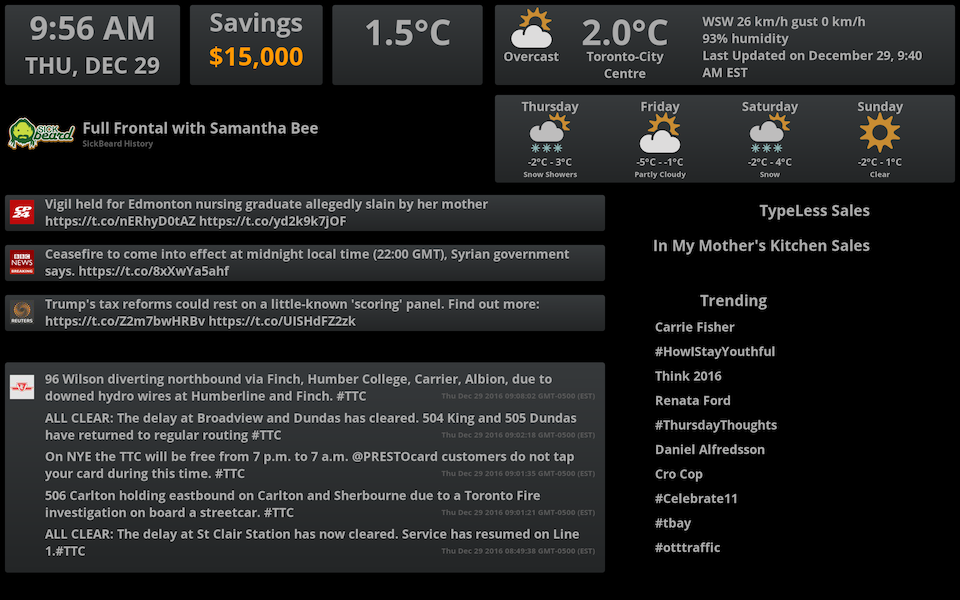 This is part of a series on running a browser full screen on a Raspberry Pi at boot.
You are reading the most current version!
Raspberry Pi Full Screen Browser (Raspbian December 2017)

One of the primary usages of the Raspberry Pi for many (myself included) has been to drive digital signage and dashboards.

It is cheap, has HDMI output and lower power, all great characteristics for a display.

Although the Raspberry Pi model 1 B, Zero or Zero W will work, they are very slow. A model 2 B should work and a 3 B is highly recommended.

Rather then re-hash how to install Raspbian on a SD / MicroSD, please see the official instructions. Use Etcher, it makes things much easier and less likely to make your computer unbootable.

By default Raspbian boots into the Pixel desktop, which is what we want. However we want to set the Locale, Timezone, Keyboard and enable ssh.

After reboot, from the Pixel Desktop, in top right corner, hover the mouse cursor over the two arrows icon. After a moment, the IP address(es) of the device should appear. Use one of them to ssh into the Raspberry Pi.

The default user is pi and the default password is raspberry.

Please take a moment to change the password after logging in over ssh:

Step 3: Update All The Things

After logging in over ssh, run apt-get update:

You should see something like the following, if you don’t please do some trouble shooting to determine the issue. If the update does not work you are going to have a bad time.

Next, upgrade the system, this can take a few minutes depending on your network speed. Run each of the following:

Run each of the above until the result of each looks like:

This means you have a fully updated system.

Chromium is the Open Source version of the Chrome Browser. It is the version that Google then takes and rebrands. Learn more about Chromium.

Edit the autostart script, comment out the @xscreensaver -no-splash line (# CHANGED) and add the rest (# BEGIN ADDED to # END ADDED) to the bottom of the file:

The additions do the following:

The Chromium parameters do the following:

1. --incognito will start Chromium in incognito mode, which is useful as avoids any “Chromium didn’t shut down correctly” messages if the device gets restarted without a proper shutdown

3. --kiosk will hide the navigation bar

4. --allow-running-insecure-content will allow https sites that include http content, normally not a good thing

5. --remember-cert-error-decisions will allow Chromium to remember saved certificates that have been ‘approved’, for example self signed certificates

At this point you are done! Restart the Raspberry Pi and you should see the website you configured Chromium to start (eg http://gordonturner.com) launch full screen!

Edit the autostart script to change the website that is launched at boot.

This is an optional section that will create a shell script to turn the screen on and off with software.

Raspbian includes a handy application called tvservice, which can turn hdmi screens on and off. The script below will turn the screen on, off and toggle (handy for an external button or remote input).

This script does depend on xdotool, to install type:

Then edit a new file screen-control.sh and paste in the following bash script.

To see usage, type ./screen-control.sh and you should see something like:

Sometimes it is necessary to exit the browser, which can be difficult in kiosk mode. To shutdown the Chromium browser when it is full screen type at the same time:

That is all. There are other details that could be customized, like setting the desktop wallpaper, so that for the brief moment it is displayed, it is ‘on brand’. Additionally you might consider making the memory card read-only, so that power cycles do not damage the card.