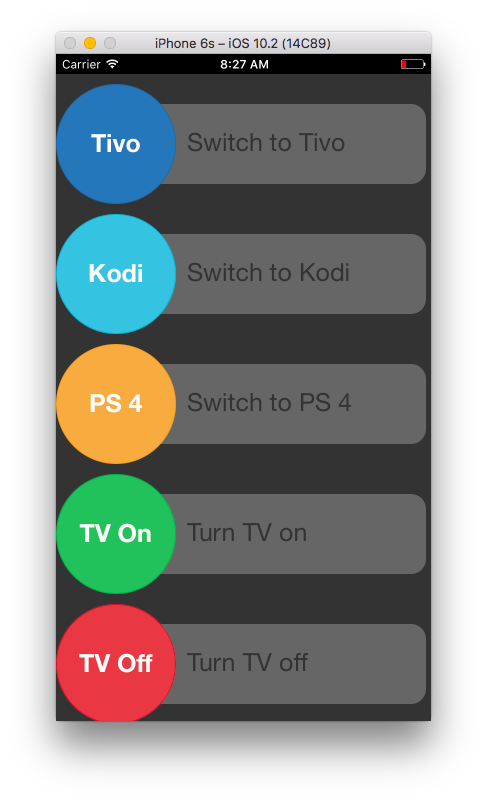 I have been using OSMC on a Raspberry Pi 2 for a few months now and have been really happy with it. (OSMC is a Raspbian based distribution that boots into Kodi.)

However, switching my TV input from TiVo to PlayStation to OSMC was a pain in the ass.

Over the years I have tried using different smart remotes (even bought a Logitech Harmony), but they all suffer from line of sight IR, lag and complicated setup.

So after working out the `cec-client` commands (see Using cec-client on a Raspberry Pi) I put together a web app that was light enough to host on the Raspberry Pi that runs OSMC.

It gets rid of the line of sight IR and lag issues, although it is not necessarily any simpler. It is a different kind of complicated.

Two out of three ain’t bad.

First step is to determine the `cec-client` commands to run by listing all the devices, creating TV on/off and testing the input selection commands.

As mentioned, I have covered this in a post Using cec-client on a Raspberry Pi, start there if you have never used `cec-client`.

The commands that stupid-remote come with are the ones that work for me: Tivo, Kodi, PS 4, Tv On and Tv Off. The commands you will use will depend a bit on your setup.

The following instructions will install `node.js` and `cec-client` on Raspbian (or Ubuntu), to allow you to run `stupid-remote` manually. If you like it and want to run it as a service (recommended, starts and stops with the device), see README Install Raspbian and Ubuntu.

Install cec-client, but first check to see if cec-client is already installed:

If you see `-bash: cec-client: command not found`, you will need to install the app:

Alternately, follow the instructions to install from source https://github.com/Pulse-Eight/libcec

At the moment, customizing stupid-remote requires you to edit HTML and JavaScript. It is not hard and there isn’t a lot of if it. Future versions of stupid-remote might provide better configuration options, but right now it is DIY.

Start by editing the JavaScript, `stupid-remote/routes/cec.js`. Copy or edit the existing `router.get()` calls to match your cec-client call, updating the @swagger in the comments as well. For example, the TV on routing handler looks like:

Finally, to start the app, change to the root of the `stupid-remote` directory and run `node ./bin/www`. The `DEBUG=*` will enable logging with can help resolve any issues.

This could have been created in any language, but node.js seemed light weight, had the cec-client bindings and Swagger UI (hey why not?).

As for the name, it is a protest of the term ‘smart remote’. They should be called marginally-above-average-remote, but that doesn’t sell well I guess.

The UI is geared towards Mobile Safari on iOS, but if there are other header or meta data attributes required to support your favourite browser, please send me a pull request. Similarly, I realize Bootstrap and the minimal UI treatment isn’t for everyone, but it is functional and gives good tap targets on mobile.